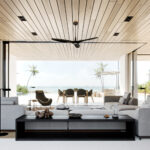 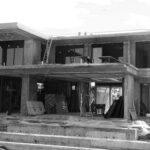 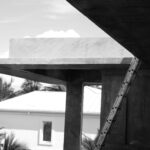 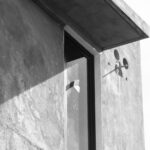 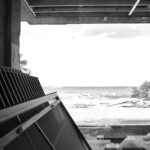 Villa Marahuyo is an Architectural exception when it comes to the upmarket Tranquility Lane homes in Leeward, Turks and Caicos.

The clients wish was for something that didn’t look like the typical luxury home on the beachfront. As a result James Hamilton Architects produce a contemporary style, unfussy villa with warm simplicity at it’s core.

Hardwood ceilings and stone facade adds a touch of the native rock on which it sits and black windows articulate the buildings expression.

Black aluminium louvres, large overhangs and small lids above the windows provide shading from the harsh sun and create a cool space which to live.

The large sliding doors on the ocean side, slide back into pockets leaving a uncluttered opening in which the sunset can be viewed.

On the interior the house contains an atrium space allow airflow to purge upwards from the sliders on the courtyard side. On the exterior the villa boasts a large black pool, firepit, hot tub, tennis court and kayak store

The house layout design has rental in mind with small bedrooms and large open living spaces. The house is featured on an article on the Turks and Caicos Real estate site